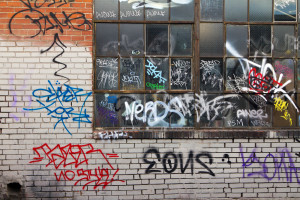 Fans of Basquiat and Banksy might disagree, but graffiti is a blight. It’s also as old as mankind and not likely to go away so property owners and managers have to deal with it. There are basically three ways to do that – strip it with chemicals, remove it by mechanical methods, or cover it.

Chemical strippers fall into two general categories, caustic and solvent. Caustic strippers (such as sodium hydroxide) work by breaking down the chemical bonds within the paint and they are not selective. If they can break down paint, they can also attack the substrate. Paint finishes will likely be removed along with graffiti, but there can be other, less obvious consequences. Brick, natural stone, concrete, tiles, metals, and other surfaces can be permanently discolored or otherwise damaged. Always test caustic strippers on examples of the substrate in inconspicuous locations.

Solvents work by breaking the bond between paint and substrate. Solvent-based strippers can be somewhat more selective than caustics, but the same cautions remain with respect to substrates, test them. More importantly, understand that any chemical strong enough to remove paint is inherently hazardous and must be used with care.

Mechanical removal methods include scraping (usually heat-assisted), the use of abrasives (grinding or delivery by pressurized air or water), or water, usually delivered at high pressure and augmented with a cleaning agent. Most abrasive methods cannot be controlled to attack a thin layer of graffiti paint and will affect the substrate; however, damage can be minimized. “Soft”-abrasive blasting media (such as nut shells) are less aggressive than sand or similar grits. Less aggressive yet is dry-ice blasting, which relies as much on thermal shock as abrasive action. It also leaves no residue whatsoever. As noted above, test in an inconspicuous area first.