Carbonation reduces the concrete’s ability to protect the reinforcement from corrosion and chlorides accelerate corrosion. 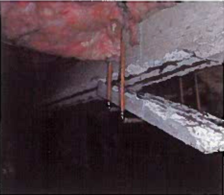 Figure 1: Typical damage to the concrete members found during the engineer’s condition survey. 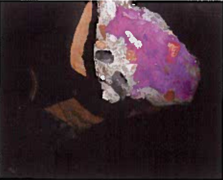 Figure 2: Pink concrete is toward the center of the member and not contaminated by carbonation.

A case study of the restoration of a concrete structure forming a crawl space and supporting two-story brick townhome condominiums above.

The property was constructed in the late 1930’s as a residential rental property on approximately 40 acres in Arlington, Vir­ginia and was converted to condominium use in 1985. The 28, two-story, townhome buildings contain just under 600 residential un its that feature brick exterior walls and flat roofs. The structures feature elevated concrete slabs that form the first floors of the units. The slabs are supported along their perimeters by brick and terracotta foundation walls and concrete beams and columns along the centers of the buildings. Most of the structures are overexposed earth crawlspaces.

During a visual survey of a building slated or an underpinning repair project, it was discovered that there was significant con­crete deterioration to many of the structur­al elements within the crawlspaces. Large sections of beams and columns had spalled, exposing embedded reinforcement that was severely corroded. The ability of the structure to support the required load was compromised due to the deterioration. Shoring was immediately installed and the owner retained an engineer to investigate the concrete failure, establish the condition of the remaining structures, determine the cause(s) of the concrete deterioration, and provide recommendations for repairs of the involved elements.

Four other buildings on the property were identified as having significant con­crete deterioration and shoring was shortly thereafter installed by the contractor. Eventually, all of the crawlspaces were entered by the engineer and repair of all of the buildings was prioritized for the owner according to the severity of the deteriora­tion. The buildings would be monitored during the project to ensure that they re­mained stable.

The goal of the project was to repair the concrete and add protection from future deterioration. The work was to be per­formed while the buildings remained occupied. Repair approaches included materials and processes that would help slow the de­terioration of the original concrete.

The engineer provided two (2) options for repair to the owner. The first recommenda­tion was to remove all of the carbonated concrete that wrapped the beams and col­umn whether it was currently degraded or not as a means to get rid of the “poisoned” material, clean the embedded reinforcement, install sacrificial zinc anodes, and repair the concrete with a high-quality repair mortar. This approach would have been expensive and time-consuming.

The alternative approach, which was se­lected by the owner, was to remove just the currently degraded concrete from the beams and columns and leave the sound concrete in place. Exposed reinforcement was cleaned and coated with a corrosion­ inhibiting paint A high-quality repair mor­tar was used to replace the excised concrete. Outside of the patch areas, sacrifi­cial zinc anodes were installed in a pre­scribed pattern to combat corrosion of the reinforcement. Once all repair work was complete, a corrosion inhibiting treatment was applied to all exposed concrete surfaces. Additionally, the soil within the crawlspaces was covered with plastic to minimize water-vapor drive and fans were installed to circulate air and help further control moisture.

The contractor faced many challenges dur­ing this project due to the limited working space. With overhead clearances as little as two feet, extraordinary measures were needed to ensure access, worksite safety, ventilation, and lighting. Repair methods also had to be modified to deliver repair materials (particularly concrete) into the crawlspaces.

Overall, the project has been a major un­dertaking for the construction team. There have been many planning and progress meetings and community outreach efforts to make sure that everyone understands the reason why the work is being per­formed and to keep them up-to-date on the project. In order to help the community or­ganize the project, provide notices, and co­ordinate work and various trades, the owner retained a project manager to help with project administration. Work is ex­pected to last three more years to complete all 28 buildings.

Figure 3: This photograph shows what is left of a concrete column after all deficient was removed.

Figure 4: The crawlspace was cleaned and covered with plastic sheeting following the repairs to the concrete members.