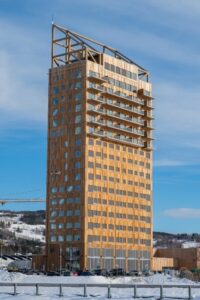 Glue-laminated lumber (also known as Glulam) is a versatile and innovative material widely used in the construction industry and has become increasingly more popular in recent years for its many benefits. Glulam is composed of wood laminations that are bonded together with high-strength adhesives to form a strong member.

Glulam members are customizable to be formed to specific lengths and curvature to fit the needs of most residential and commercial wood-framed properties. Most notably, in 2019, the construction of an 18-story building in Norway was formed from solely glulam and laminated timber beams. Glulam beams also have a much better environmental impact compared to steel or concrete beams for their carbon storage capacity. Furthermore, glulam beams have good fire resistance and can outlast steel beams due to a charred carbon layer that is formed on the surface of the beams which insulates against heat. In our industry, they are typically utilized to span large openings that regular timber beams cannot, like balcony door and breezeway openings.

While the benefits for glulam beams look to be impressive, the necessity of glulam beams over other engineered lumber beams may not be the most cost-effective solution, as the cost for glulam beams are higher than they are for many other engineered lumber. Deterioration of glulam beams is common due to high humidity areas and water intrusion through improper or unsealed flashings. While glulam beams are often marketed for their ability to be exposed to the natural environment, they are often very susceptible to deterioration due to construction methodologies. Glulam beams are prefabricated to an exact size; therefore, if the beams need to be cut to fit new dimensions, the entire beam can become susceptible to deterioration if the cut portions are not properly protected with a sealer material on-site.