In The Know with Stamped Concrete 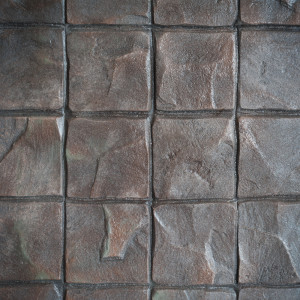 We routinely encounter stamped concrete in the course of our work and a number of issues seem to be commonplace. Where exposed to chemical deicers, particularly sodium chloride (salt), scaling/spalling is present far more often than not. Salt reduces the freezing point of water, thereby potentially increasing the number of damaging freeze-thaw cycles.

In larger installations (such as paving for roadways and parking lots, pool decks, etc.) we have found that random cracking is the norm. Cast-in-place concrete of any significant size (stamped or not) will inevitably crack. Weakened planes (control joints) are normally formed or cut into concrete to influence where those cracks manifest and the key word here is “influence”. If control joints are properly spaced (24 to 36 times the slab thickness) and of sufficient depth (at least one-quarter of the slab thickness) they’re usually effective, provided the concrete was properly mixed, placed, and cured, and the underlying soil is firm enough to support it.

Concrete strength is a function of mix ratio (amounts of Portland cement, sand, gravel, water, and chemical admixtures). Of particular concern is water. The strongest concretes have just enough water in the mix to ensure hydration, but the drier the mix, the harder it is to work with. More water makes the paste more plastic and workable, but that produces a weaker concrete and promotes cracking. As the concrete cures, it loses water, which means it loses mass. It shrinks, and more water translates to more shrinkage. When shrinkage is restrained (such as by supporting soils) tensile stresses develop and concrete is weak in tension. Plasticizers can be added to make concrete more workable with less water.

Proper curing is a key step in controlling the rate of shrinkage (slow is better and produces stronger concrete). According to standards published by the American Concrete Institute (ACI), at least seven days of wet curing is needed for non-rapid setting concrete. Wet-curing entails placement of soaked burlap or other fabric over the concrete and covering it with plastic sheeting, along with re-wetting as needed. A less costly, easier, but less effective alternative is the use of curing agents (usually waxy coatings intended to retard evaporation). Rapid curing is a major cause of cracking in concrete and placement during hot weather accelerates the process, especially in the absence of wet curing.

Stamped concrete has its place in modern construction and we’re not suggesting it be avoided altogether, but you should be aware of its limitations. As with any type of construction, quality is essential to performance. We strongly recommend development of detailed specifications by a qualified engineer and inspections of placement operations by a qualified professional are also essential.