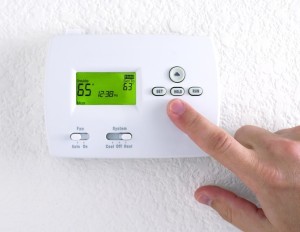 When water freezes it can exert pressures up to 20,000 pounds per square inch. When it freezes in a closed space (like a plumbing or fire sprinkler line) bad, expensive things happen. Water conductors are usually routed within interior walls where they tend to stay above freezing temperatures, but some lines (especially for sprinklers) are necessarily located in attic spaces or in exterior walls.  Heat loss at those areas is inevitable. Insulation is installed to help reduce loss, but no amount of insulation can stop it entirely.

Under normal circumstances, and as long as the insulation is adequate (with respect to thermal resistance), dry, uncompacted, and positioned between the pipes and the unheated side of the wall or attic, the pipes should be protected against freezing. Where problems often arise is during prolonged absences from home (such as vacations) during winter months when occupants turn their thermostats down to conserve energy.

A setting of sixty degrees, as an example, only assures something close to that temperature at the thermostat. Heat loss through attics and walls could easily produce freezing temperatures at the pipes therein. Turning heat off entirely (which also happens) obviously makes matters far worse.

It could be beneficial for Condominium associations, apartment complexes, etc. to establish a policy that thermostats are not to be set below a reasonable temperature during heating season.   Sixty-five to sixty-eight degrees would probably suffice for most properties in the Washington/Baltimore area, but a higher minimum may be indicated for older buildings or those in harsher climates.

Another problem area is interruption of electric or service for non-payment, which of course translates to no heat. Units that are abandoned or in foreclosure are particularly vulnerable.  We recommend that arrangements be made with gas and electric providers to notify management when service to condominium units, townhomes, or apartments is about to be discontinued. If necessary to do so, paying those utilities until accounts are transferred or settled is far less costly to an Association than the cost of repairing damage caused by froze and burst water lines. Even if the damage is covered by insurance, the rate hike the carrier is sure to impose will likely be considerable.