What’s So Special About 28 Days? 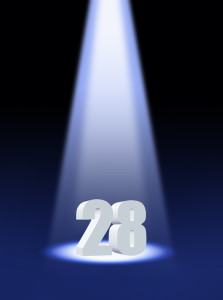 When placing new concrete, the contractor or supplier may instruct you to wait an odd number of days before testing it to see if it is strong enough. That number will probably be 28 days. Why? Is it because the supplier’s favorite month is February or because 30 sounds too casual?

As the days add up after the concrete has been placed, compressive strength increases. The question is how did the concrete industry pick 28 days and not 27 0r 29? It’s because at day 28, the strength of the concrete is about 99% of its maximum value and after this day increases in strength are expected to be miniscule.

After one day of setting, the concrete generally reaches 16% of its maximum strength, at day three it’s usually about 40%. By day seven the concrete’s strength is usually around 65% of its design value, and at day 14 it would be expected to be around 90%. After 28 days, the concrete is typically at 99% of its intended strength. It’s clear that the concrete gains strength rapidly in the initial days after casting, but it may take over a year to reach its full compressive strength.