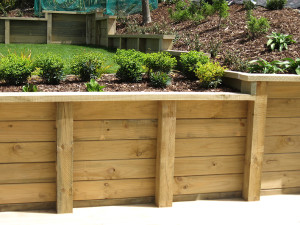 Preservative (pressure) treated wood is among the most common materials used in the construction of retaining walls. Ground-contact rated is standard for that use, but a GC label doesn’t tell the entire story. The important factor is preservative retention – the amount of chemical that remains in the wood after treatment, usually expressed as pounds per cubic foot or PCF. Optimum levels vary with the chemicals used and some products considered suitable for ground contact have retention levels that are less than desirable for retaining walls.

The American Wood Protection Association (AWPA) lists three categories for ground contact use, General Use (UC4A), Heavy Duty (UC4B) and Extreme Duty (UC4C). Heavy Duty protection would be suitable for most circumstances. Extreme Duty would be appropriate in such locations as freshwater lake or pond side walls. AWPA has separate categories for use in marine (saltwater) environments.

The timbers most used in retaining walls measure six by six or eight by eight inches in cross section and full preservative saturation is difficult to achieve in material that thick. Consequently, the central portions are less protected and decay (rot) can occur deep within the wood before there’s any visible evidence of distress. So-called Ground-Contact-rated, forty-year timbers can experience advanced deterioration within as few as fifteen years, while appearing sound.

In order to truly evaluate timber retaining walls it’s often necessary to sample the material by extracting full-depth cores with a specialty bit. Usually, a simple visual examination is sufficient to determine the level of degradation. Sounding (with a hammer) can reveal advanced decay. Rot reduces wood to dust, which will produce a hollow sound if sufficient wood has been compromised.

There are factors apart from chemistry that can play into the performance of preservative-treated wood, including the position of the wood within the tree from which it was obtained. Preservatives tend to penetrate sapwood easier than heartwood. Species that contain more sapwood (such as Southern Pine) predominate in the industry. Other species (such as Douglas Fir) that have more heartwood are also used, but they require different processes, usually in the form of ammonia-based carriers. While ammonia has better penetration characteristics, it’s also more corrosive to metal fasteners and fixtures.

Treatment chemical will inevitably leach out of wood and the speed of that process is governed by water. A proper drainage system consisting of a vertical drainage course (such as gravel) collection devices (such as perforated pipes) and discharge features (weep holes) will help slow the loss.

Retaining wall construction is typically a complex and expensive undertaking, but the cost difference between merely acceptable and superior products is relatively small. Retain the services of a professional to design your wall and specify the best materials. Your good judgment will be rewarded